What Are The Most Dangerous Roads in Rhode Island? 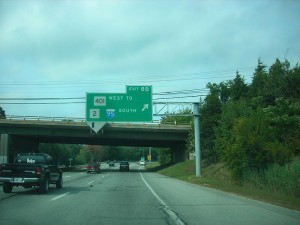 Personal injury lawyer Providence RI roads are treacherous – but what are the top 10 most dangerous?

As a Providence personal injury lawyer who drives the streets of Rhode Island on a daily basis, I know firsthand that driving in Rhode Island is not for the faint of heart!

And worst among them are some of the intersections in Providence, Woonsocket, Pawtucket, Cranston and Johnston in Rhode Island.

Intersections are magnets for car accidents as they are usually crowded with pedestrians, bicycles, and of course plenty of trucks, cars and SUVs.

Although Rhode Island laws are strict when it comes to traffic safety, stop signs and traffic signals are oftentimes missed or blown through – making intersection accidents in Rhode Island far too common.

Worse yet, negligent drivers are frequently a cause of these accidents, looking at their cell phones, texting while driving or just simply not paying attention.

Even seemingly small fender benders can turn into significant injuries, which may require the service of a personal injury lawyer Providence RI – although we’d rather see you safe instead of having to come to us.

But as New England native Ben Franklin once said:

“An ounce of prevention is worth a pound of cure”

And with advice from old Ben, we offer you an ounce of prevention so you hopefully may never need the cure…

The Top 10 Worst Intersections and Roads In Rhode Island

If you know what intersections and merges on our highways and streets to be the most careful on, perhaps we can reduce the number of accidents and injuries which occur in these Rhode Island intersections.

GoLocal recently compiled a list of the 10  most dangerous intersections in New England – Rhode Island with the dubious distinction of having eight out of the top ten:

This stretch of I-95 in Providence can be extremely confusing to most people as N. Main St. and Smithfield Avenue have their own set aside lanes.

Where Route 6 and Route 10 meet, motorists can easily get confused because of quick lane changes that require lightning fast reflexes. The result is many accidents for this Providence personal injury lawyer…

This three-quarter cloverleaf interchange with Route 37 is incredibly treacherous. Watch out here!

Branch Avenue is extremely busy and a potential shortcut for commuters trying to avoid rush-hour traffic in downtown Providence.

This last-minute lane change on exit 6 to Route 6 can be super challenging for even the most experienced driver.

The curves on Thurbers Ave are severe and infamous for all Rhode Islanders. Be careful on this one as it’s extremely deceptive when navigating.

Especially for the novice driver and Rhode Island, this intersection is particularly treacherous. Drivers need to make a quick decision as to whether they want to head to Warwick or Cranston in a split second.

This one is a doozy. It may rank as one of the scariest intersections in the United States. It’s easy for drivers to misjudge the departure at this exit onto route 146, especially if they are looking for the state house exit. Use extreme caution  here.

If you’ve never driven this intersection before, this requires high-speed navigation – and is one of the most dangerous interchanges for drivers. As Providence personal injury attorneys, we’ve dealt with many injury cases related to this interchange.

Having the dubious distinction of the number one ranking in not only Rhode Island but also in all of New England as the most dangerous interchange, you must navigate this one carefully. Although this stretch of I-95 ultimately has been for the better for our state, the new location of exit 20 confuses many motorists. Use extreme caution here, especially when entering the city of Providence.

It’s really amazing to note that eight out of the ten most dangerous intersections and interchanges in all of New England are in the little state of Rhode Island.

New England in general, has never been known for its easily navigable roads. But particularly in Rhode Island, all drivers must take extreme precautions to avoid accidents and potential injuries that result.

If you are driving on any of these interchanges and intersections in Rhode Island, don’t drive distracted, use all your mirrors and be extremely aware of your blind spots. Further, plan your exits well in advance by merging left or right depending on what the road signs indicate.

And If You Are Injured at Any of These Intersections…

Get a personal injury lawyer Providence RI who knows these roads and intersections and has won substantial settlements for clients who have been injured on these and any other treacherous intersection in Rhode Island or Massachusetts.

And although you may want to –  it costs you nothing to do it.

Be careful out there!