A Look Back On Rhode Island’s Narragansett Park 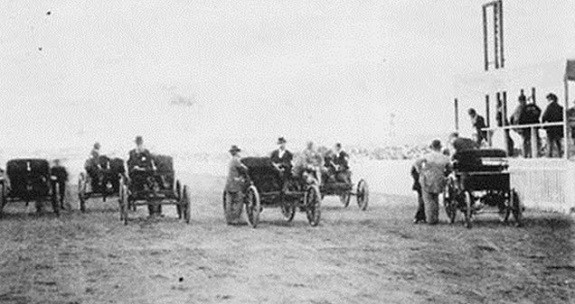 As a RI motorcycle accident attorney who values the history that can be found in our Rhode Island and Massachusetts communities, I could not help but take a look back on Narragansett’s automobile park.

My Cranston office is actually located close to the first auto racetrack in our country. Established in 1896, Narragansett Park, located off Park Avenue in Cranston, has quite an interesting story.

The first auto-race in the United States was held at Narragansett Trotting Park, a mile long dirt oval at the state fairgrounds of Cranston that were originally used for horse racing. The race was sponsored by automobile companies who wanted to show off their new and exciting electric, steam, and gas powered vehicles to a fascinated audience.

The race was a hit. With about 60,000 fair-goers in attendance, news of the race spread through newspapers and magazines like wildfire. The racetrack was an instant attraction and the talk of the town. Seven cars entered the race including five internal-combustion cars and one other battery-powered machine.

The first race started slowly and caused uproar amongst spectators who shouted, “Get a horse!” Yet an electric car built by the Riker Electric Motor Company soon pulled ahead of the line and easily beat out the other vehicles, winning the race. The Riker finished five laps in about fifteen minutes and hit tops speeds of 24 miles per hour.

As a RI motorcycle attorney even I admit that this state is probably not the first place that I would think of when it comes to American automobile racing. You may not be aware, but car racing in the Ocean State actually has an extremely rich history-and I am not just talking about commuters speeding down I-95…

The Narragansett race mentioned above was really just the start. The Cranston track drew so many spectators that cities all over the state began to follow in our footsteps and soon built dirt ovals of their own. The original Narragansett Park received so much use that its owners actually had to close it in 1914 for renovations. But when it reopened the following year, it was unlike anything car racing fans could imagine. The new track was paved, and nick named the “Super Speedway.”

The new track was designed for whopping 100-mile races.

The Rise and Fall of the Narragansett Track

The first contest at the new park was held on September 18, 1915. 50,000 people came to the first contest and cheered on the celebrity racer Eddie Rickenbacker as he cruised to victory over a field of famous drivers in spectacular cars.

Unfortunately for the track’s investors, Rhode Islanders enthusiasm for car racing was short lived. It waned as other kinds of mass entertainments grew more popular. Sadly, the Cranston raceway closed its doors for good in 1923.

Even though the race tracks have been long closed, some Rhode Islanders still have a need for speed. As a Rhode Island motorcycle accident attorney, I see firsthand how this passion for speed can affect people’s lives.

Motorcycle accidents are far more common than you may think in our state, and it is important that you know what to do if you find yourself in that unfortunate place. Unfortunately, motorcycle rider fatalities are nearly thirty times more common than drivers of other vehicles.

Rhode Island’s many scenic roads are perfect for motorcycle riding during the warmer months – but not all drivers pay constant attention. Your biggest concern as a motorcyclist is not your own ability, but the caution and care other drivers may fail to exercise. Unfortunately, we deal with injured parties often…and most times, the motorcyclist is not at fault.

If you or a loved one suffers a motorcycle accident in Rhode Island be sure to contact us. You’ll speak to someone who understands your case, and knows how to navigate the Rhode Island court systems.